A historic moment for the region is the Arab world's first interplanetary mission to Mars. 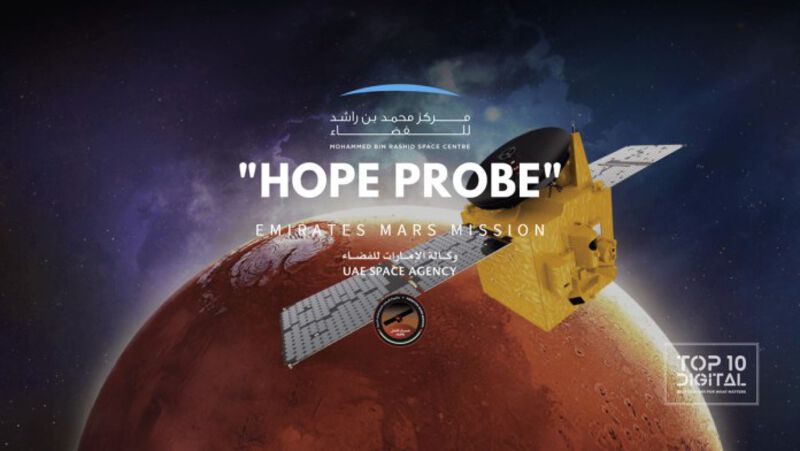 The 200 million USD mission is set out to provide a picture of the Martian atmosphere and to study daily and seasonal changes on the planet. Sarah Al Amiri, the mission's science lead says the team is especially interested in a possible link between dust storms and the loss of hydrogen and oxygen -- the building blocks of water -- from the Martian atmosphere.

The Amal (Hope in Arabic) Probe was launched from Japan's Tanegashima Space Centre just before 2:00 am (GMT +4). It took off aboard a Mitsubishi H-IIA rocket heading towards the east, on a trajectory that takes it over the Pacific Ocean. An hour after the launch, the spacecraft (Hope Probe) separated from the launcher, and around six to eight minutes after separation, Hope Probe deployed its solar panels and averaged a speed of more than 75,000mph.

Omran Sharaf, project director of Emirates Mars Mission, said about an hour-and-a-half after the lift-off that the probe was sending signals.

Mr Sharaf said the Mars mission "sends a very strong message to the Arab youth that if the UAE is able to reach Mars in less than 50 years, they could do much more".

The journey to Mars will take seven months before the probe orbits the planet and sends back data.

The UAE, which has a population of around 9.4 million, announced plans for the mission in 2014 and launched its National Space Programme three years later.

Hazza al Mansouri became the first Emirati in space when he flew to the International Space Station in September.

NASA tweeted its congratulations after Hope's successful launch, writing: "I wish you a successful journey and look forward to the sol when we are both exploring Mars ... I cannot wait to join you on the journey!"

"The data gathered by the probe will add a new dimension to the human knowledge," said Dubai's ruler, Sheikh Mohammed bin Rashid Al Maktoum, on Twitter. "This is our latest contribution to the world."

Dubai Summer Surprises Start This July!
Here is a list of activities and offers that you might like:
Ten fun things to do indoors in Dubai
We have curated the best list of indoor activities in Dubai for you.
Celebrity Chef Restaurants in Dubai
An Ultimate Guide to Celebrity Chef Restaurants in Dubai
Rooftop Venues with Stunning Views in Dubai
Dine with the stars or grab a drink while watching Dubai's beautiful sunsets at these venues.
Must-Visit Restaurants In West Palm Beach
Your ultimate guide to the best food around Palm West Beach.
Top 6 Places to Enjoy Dinner and Show in Dubai
The Best Places to Enjoy Dinner and A Show in Dubai - Our Top 6 Picks
Newly Opened Pubs in Dubai
The land has recently got a few new pubs, all set for you to try out. Here is a list of the new-opened pubs in Dubai that you might want to visit.
Newly Opened Beach Clubs in Dubai
Now, talking of beaches, let's get detailed know-how on some of the splendid beach clubs of Dubai where you have all the possibilities of creating the best memories of your life.
Newly Opened Restaurants in Dubai
A newly opened restaurant is news to cherish for a gourmet. If you plan to take a tour of Dubai, the following places are a must-visit. The country is adding them to its unique dining list.