Children starting school this year may be impacted by the amendment in the Ministry of Education’s (MoE) age requirements.

A recent tweet by the Knowledge and Human Development Authority (KHDA) stated: “Your kids may be affected by the change in age requirements if they are starting school next year.”

The UAE has clarified the minimum age for admissions of pupils in preparatory school and kindergarten, raising the age by four months, starting with the next academic year.

The decision applies to students of public and private schools that follow the MoE curriculum and French schools for the academic year 2021-22.

Dubai’s education regulator has also advised parents to check the frequently asked questions (FAQ) section on its website, and MoE’s resolution for all schools in the UAE.

The ministry indicated that the minimum age for admissions of students in private schools whose academic year begins in April will be calculated in such a way that the child must have reached the acceptable age by March 31 of the school year in which they are admitted, starting from the academic year 2022-23.

No exceptions will be accepted on the dates specified in the decision, according to the ministry. Cases of students coming from outside the country will be studied and registered in government schools based on their fulfilment of the acceptable age.

Authorities said the dates specified in the new decision only applies to the registration or admissions of new students and don’t affect continuing students.

The age requirements will change for new students enrolling in FS1, FS2, Year 1 and Year 2 (Pre-KG, KG1, KG1 and Grade 1 respectively), according to the UAE’s MoE, resolution no (24).

For schools that start in September, mainly IB, UK and American curricula schools, this change will be applicable from the start of the 2021/22 academic year in September 2021.

The cut off age for Pre-KG or Foundation Stage 1 should be 3 years by August 31, 2021 as opposed to the earlier deadline of December 31.

Similarly, children starting KG1 or Foundation Stage 2 should be 4 years old by August 31 instead of the previous December deadline.

Criterion for UAE schools starting their academic session in April. For schools that start in April, primarily Indian and Pakistani curricula schools, this change will be applicable from the start of the 2022/23 academic year (next year) in April 2022. 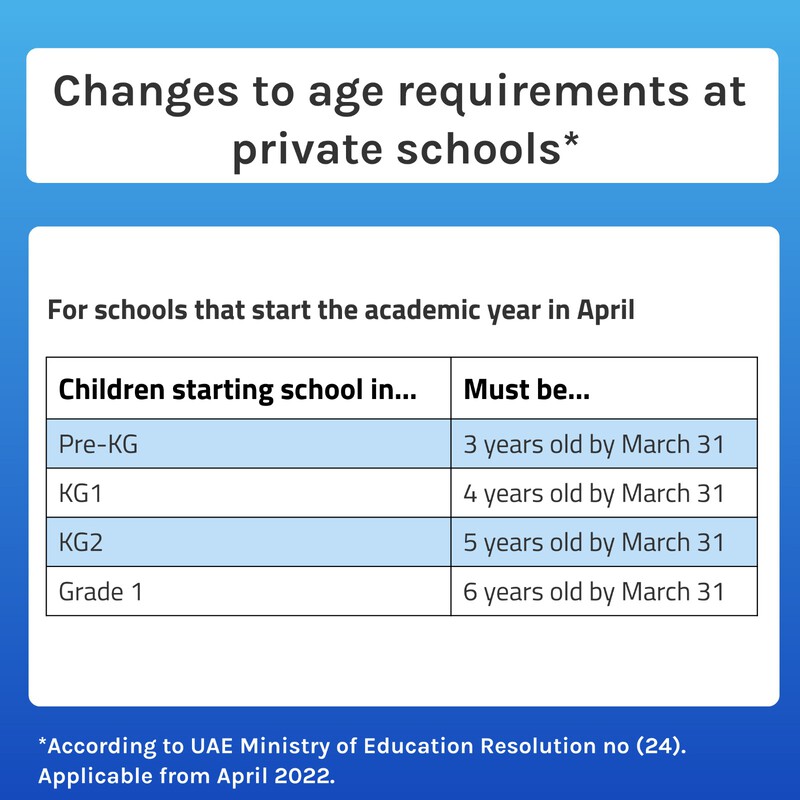 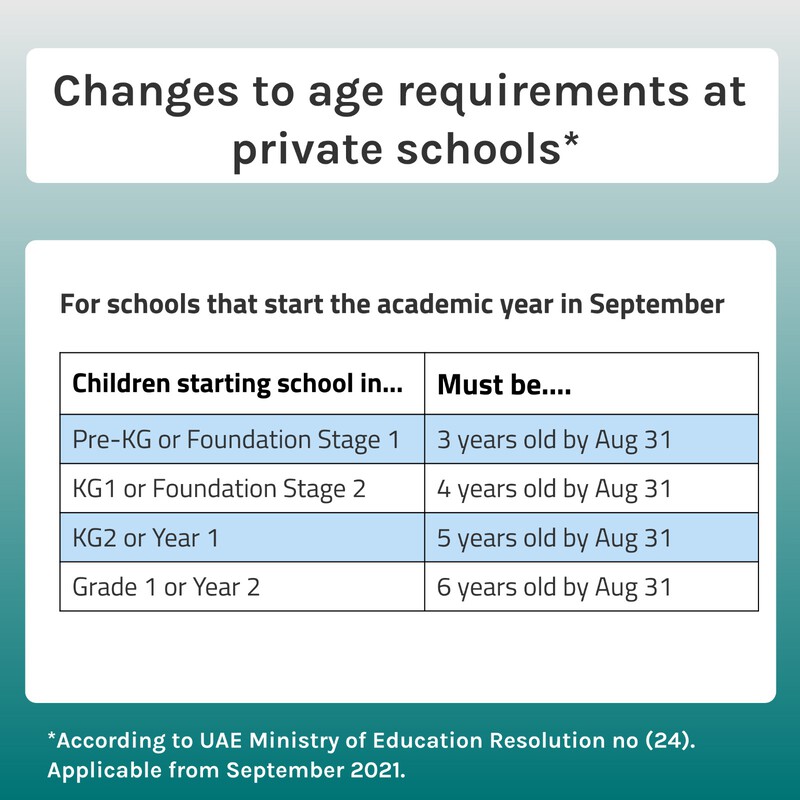